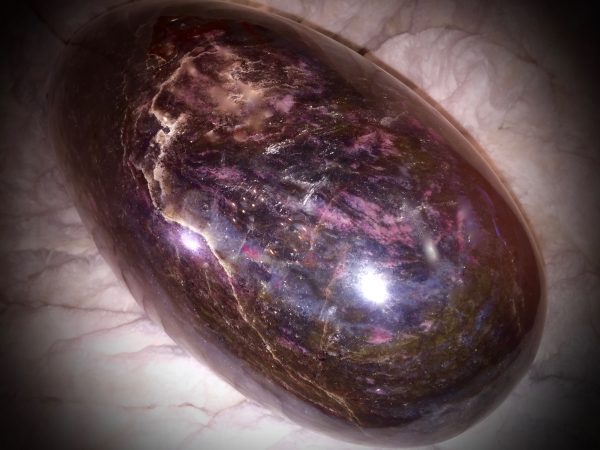 This Shiva Lingam of Iolite with ruby crystals is phenomenally rare. We know of three in the world, two of which we know the whereabouts and this last one is being offered to the Magician it seeks. Where do I even start with this spectacular lingam. Well, lets start with the Iolite, the “Vikings Compass.” The Viking’s had already figured out how to use Iolite to navigate as it determines the direction of the Sun on overcast days – by determining the direction of polarization of the sky overhead.

The shape is known as a lingam commonly seen as Shiva-Linga. The Shiva-linga, a phallic symbol of the abstract generative power of Lord Shiva, the Destroyer is seen as the beginning-less and endless cosmic pillar of fire – the cause of all causes. Now, combine that with Iolite and ruby crystals making it perfect to destroy the upper limits of the imagination beyond what you know, beyond what you see and beyond the beyond to bring forth new forms, entirely new worlds.

Iolite strengths imagination to visioneer unreality into reality. If it’s adventure you want into the unknown this is the stone for the master magician as the rubies combined with the Iolite adds focus and heightened awareness.

As the Shiva Lingam represents the phallic symbol of energy, prana and intense vitality; the Iolite and Ruby is especially potent within relationships. Building strong vital relationships whether as a leader or strengthening your own personal relationship this lingam is for those who feel and know its power. I trust whoever knows this piece, knows its purpose in their life. 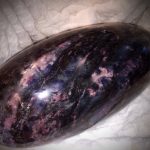 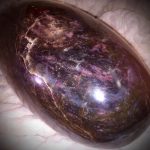 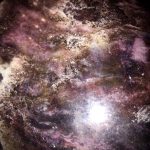