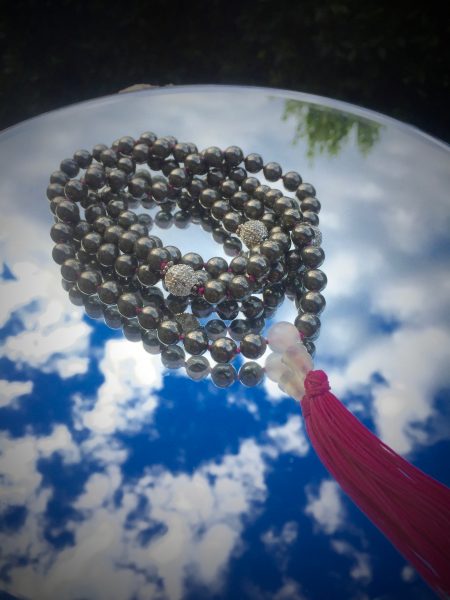 This beautiful assortment of 108 pieces of white, grey and peach moonstone in this stunning Mala holds a precious energy. Patti’s intention when she began creating these Mala’s in 2014 was as a Reiki energy shield for those with acute intuition and perception. The energetic combination of all of the assorted moonstones emits a unique resonance that everyone is drawn to.

Pyrite is an earth element and solar in energy. It deems the wearer the ability to create wealth by one’s own power. It is a mineral of vitality seeing projects through to completion while tapping in to your unknown potential that has not yet been activated. This stone being used as a protector is highly effective as it deflects any negative energies and protects the wearer during risky times.

Each quarter of 27 beads are each 8mm pyrite, the spacer bead is a pave swarovski crystal sphere and the guru bead is Rose Quartz with a length of 22″. This Mala can be worn as an amulets as well as functioning prayer beads.

How to Use a Mala by Ram Dass

A mala is a string of beads, used to chant the names of God. It’s the same thing as prayer beads, or a rosary. A Hindu mala typically has either 108 beads (108 being considered a sacred number in Hinduism) or 27 beads (which is one-fourth of 108). In addition to the 108 or 27 “counting beads,” a mala generally has an additional bead, called the “guru bead,” which hangs perpendicular to the circle of counting beads.

A Hindu mala is usually worked with by using the right hand. The mala is held resting over the third finger of the right hand, and the beads are brought toward you, one by one, using the thumb. Each bead counts one repetition of the mantra. When you get around to the guru bead, you don’t count it, and you don’t pass it; you stop there, mentally bow to the guru, flip the mala around, and start going back the other way. Each time you come to the guru bead you awaken once more, then you turn around and go back the way you came.

The Pause in Joy Mantra that is one of Patti’s favorites is “Lokah Samastah Sukhino Bhavantu” and can be found in the Meditations to download. The translation of this mantra is, “may all being everywhere be happy and free, and may the thoughts, words and actions of my life contribute in some way to that happiness and to that freedom for all.”